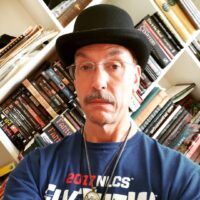 THE SHORT VERSION: David Niall Wilson is a USA Today bestselling, multiple Bram Stoker Award-winning author of more than forty novels and collections. He is a former president of the Horror Writers Association and CEO and founder of Crossroad Press Publishing. His novels include This is My Blood, Deep Blue, and Many More. Upcoming works include the collection The Devil’s in the Flaws & Other Dark Truths, and the novel Tattered Remnants. His most recent published work is the novel Jurassic Ark – a retelling of the Noah’s Ark story… with dinosaurs. David lives in way-out-yonder NC with his wife Patricia and an army of pets.

THE REST OF THE STORY: I was born in a very small town in Illinois. Clay County has fewer people in it than your average large city, and Flora Illinois is so tiny it barely hits the map. That’s where it happened, though. My grandparents lived there, and I spent a lot of happy times with them in my youth –particularly my grandfather, Merle Cornelius Smith –who was likely the most amazing man I’ll ever claim association with. But that’s another story; this one is about me.

My first really clear memories start around my third year of life, when my father left. He took me out for a drive, let me sit on his lap, then went back out for milkshakes and never came back. Things blur quite a lot during that period, but after a period of living with my grandparents, my brother and I were whisked away to Charleston Illinois, where our mom had a job working in one of the cafeterias at Eastern Illinois University, and had married a barber named Robert Leland “Bob” Smith. I could write volumes about good ol’ Bob, but I won’t. If you really want to meet him, look between the lines of the bits and pieces of Deep Blue where Brandt talks about his father. Think Seagram’s 7, Ballentine beer, cheap cigars, Hank Williams, Sr., and Archie Bunker and sort of squash it all together into a 6’4″ 270 or so pound frame –that was Bob. Formative? Yes. Important here? Nope.

I escaped Charleston, family, Bob, and a number of other things in 1977 when I left in June and joined the United States Navy. I headed for San Diego, where I went to boot camp, then to Groton CT for submarine school (which I dropped out of because my ears wouldn’t equalize). I ended up in North Chicago attending Electronics Technician “A” school. I learned guitar, got engaged, unengaged, taught Bible School, got excommunicated (or the Church of Christ version of that), and moved on to San Diego, California once again as part of the crew of the USS Paul F. Foster.

My time in the US Navy would fill a dozen books. In fact, parts of it can be found in almost everything I’ve written. Many of my novels were typed on US Navy computers (later on my own, but still on board) and the first two issues of my magazine, THE TOME, were printed and published on board the USS Guadalcanal (thank you Uncle Sam for supporting the arts). I was stationed on a lot of ships, went on a lot of cruises, lived in Rota, Spain for three years, and wound up retired in Norfolk , Virginia . I’ve worked as a contractor with several companies and am now the IT Manager and Facility Security Officer for a company in Elizabeth City, North Carolina.

We live in a nice, new house now where everything mostly works, with a very cool addition on the back that got installed just before the pandemic. Times are better. When we first moved from Virginia, though, we lived in the historic William R. White house in a tiny place called Hertford, NC, where you could, at the time, buy your hardware from a man named Eerie Haste, and where you can still get an ice-cream cone from the racist, homophobic drugstore owner on the corner. I have a woman who loves and supports me, Patricia Lee Wilson (writes as Patricia Lee Macomber), three great sons, two of which are serving now in the US Navy, and the third of which is working for an Engineering firm in Washington, D.C. I have a lovely, talented daughter who lives in Ohio with my son-in-law Joshua, who plans to be a commercial pilot and takes amazing photos of the stars, and another daughter, eighteen years old and smarter than any eighteen-year-old ought to be, who keeps me on my toes. She will be headed off to Tulane for her two year baccalaureate program. She’ll graduate high school with an associate degree. She is also an author, both the girls are. You can buy Stephanie’s “Tales of the Southern Hotel,” a collection of stories about a young girl named Mary Lou who has visions of the past, and two children’s books by Katie, our nine year old, Perilous Pink PcGee, and Mars Need Pumpkins, available for Kindle, and in unabridged audio.

I’ve been a USA Today bestselling author and sold a small pile of novels to date and published over 150 short stories, been in 32 or so anthologies, countless magazines, year’s best collections, won awards – notably The Bram Stoker Award for poetry, which I share with co-authors Mark McLaughlin and Rain Graves, and a second Stoker for my short story “The Gentle Brush of Wings,” from my Stoker nominated collection Defining Moments. I’ve been President of the Horror Writer’s Association, and I’m an active member of that organization, as well as SFWA and the International Thriller Writer’s Association.

These days, along with writing, I’m CEO of Crossroad Press, an ever growing print, digital and audio publishing company. Now, enough about me…let me tell you a story