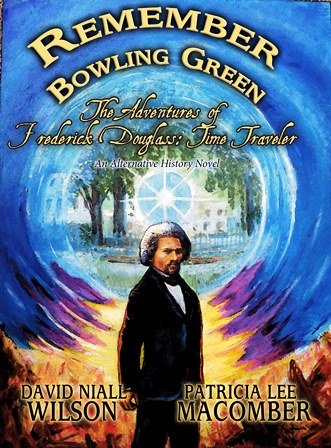 Available in Kindle and trade paperback and hardcover at Amazon

Something very strange is going on in Bowling Green, Kentucky. A masked terrorist attacks a local politician and a news reporter at a minor league baseball game. A Gay Pride parade is bombed. A veteran’s home is invaded and taken over by new ownership, and every resident that is not Caucasian has suddenly…disappeared.

Krump Enterprises, run by Ronald Krump and his assistant, Race Scanlon, have begun a systematic takeover of the city, spreading rumors about immigrant violence, tearing down horse farms to build a country club, blackmailing the mayor, and much, much worse.

It’s up to Police Chief Hannity, Dr. Abner Brody, a reporter named Lauren Kelly, a stoner named Walt, and Frederick Douglass, time traveler, to track down the truth, and stop Krump before the city falls under his sway, and even darker days prevail.

Remember Bowling Green is a cautionary tale, first in the Crossroad Press series of Alternative History novels. Though we are not directly affiliated with the ACLU, 80 percent (our normal author share) of proceeds from this book will go to the ACLU to help fight for our rights and freedoms.

Let no one forget Bowling Green!