The Devil’s in the Flaws & Other Dark Truths 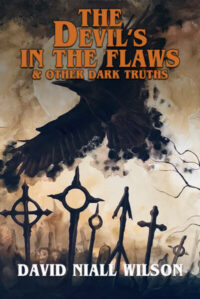 Sometime this fall, my new collection will be released. It’s titled The Devil’s in the Flaws & Other Dark Truths, as you might have guess from the title above. This is my first, I guess you’d call it formal, collection since Ennui & Other States of Madness was released by Dark Regions Press. This is sort of an “essential” collection, one of several to come. It features eight previously unpublished works including the title novella (about 25k words). It also contains several of my stories that have appeared in anthologies previously, but that I think have probably either been lost in the “and others,” or published so long ago they are forgotten. There are also a couple I just think are among my best.

The book is with several beta readers now, but I’ll release the final TOC soon, because as a sort of experiment in how it might work out for future books, Crossroad Press will be offering a signed, limited HC edition of the book. This edition will be printed in at least 25 copies, but the number of copies beyond that will be determined by pre-order. Once the number is reached, that will be the total of the signed copies ever to be printed. The price for the edition will be kept as reasonable as possible. Then the book will be out for review, copies to awards committees, out for blurbs until fall when released in trade hardcover, trade paperback, eBook and audiobook editions. Updates will be posted as things change, but this is the official announcement. Hope you’ll all buy and enjoy it.

The Novels Section is Semi-Complete