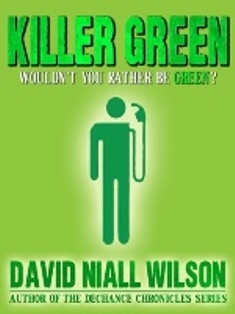 Available in eBook formats from Amazon and Barnes & Noble

Killer Green is a little bit Pulp Fiction and a little bit Natural Born Killers with some CSI thrown in for good measure. The characters are well developed and so likable that I was sad to see the end of the book. There was a bit of a splatter factor to Sam and Delilah’s cross country adventure, but it was tempered by the fact that every corpse served to settle their own Karmic debts. If you like fast paced, witty, action filled adventures, Killer Green is for you. I only hope that the author will get his little band of misfits back together soon for a sequel. – Amazon Reviewer

Quentin Tarantino meets Smokey & The Bandit in this noir, science-fiction thriller. Sometimes, people just need killing. When Sam West wanders into the Sunny-Side-Up Diner for the last time, hoping for a last slice of Mort’s world-class pie, and one last look at a waitress named Delilah, he has no idea he’s about to become the instrument of a great, kharmic cleansing. The only thing crazier than the seemingly inevitable trail of bodies following Sam and Delilah south is the fact that – as State Police and local sheriffs begin to investigate – they find no evidence. Nothing. And the missing bodies are just the start, as an unlikely band of companions are drawn together in a scientific experiment more in line with the TV Series Fringe than anything in reality, with the threat of alien probes, local law enforcement, and rednecks around every corner.

Killer Green began life as a joking conversation on Twitter. It became a phenomenon – was written into a screenpaly – shared on the Internet, optioned by a production company, and continues it’s social media-born roll toward the Mexican border.

It’s ecologically relevant. It’s good for the environment. It’s a novel you will not forget, that will leave you laughing and hold your attention to the last word.

Wouldn’t you rather be green?