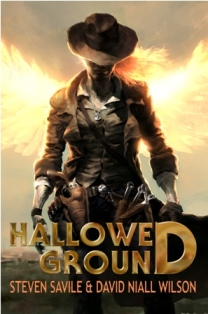 “A surreal, pulp school, darkly fantastic oater that sets all the elements of your favorite western tropes on their ears (and noses, foreheads, and asses).” – Tom Piccirilli, author of Nightjack, The Cold Spot, and The Fever Kill.

Not your typical western. Not your typical creepy story either. The author captures your imagination and holds on to it to the very end. There were only a few moments of confusion, but in general, a very understandable and good read. The words flowed, the plot thickened, things in the night were made known. Loved the Cover. – Amazon Reader

“She died,” Chessie said. “She died, rose, and nearly died again. She comes. The crows know her – the crows guide her. She follows the sound of a crying child. She follows the drag of un-kept promises on her heart.” – Chessie – Hallowed Ground

“They came in the night with their creak-wheeled wagons and patchwork tents, rolling down through the gulch and up the other side to pitch camp. In Rookwood, they called it ‘Dead man’s Gulch,’ and in Rookwood, names were important. If you walked too far through that God-forsaken, dust-drowned ditch, you were bound to drag your boots through bones. If you felt something sharp dig into your heel, it could be a tooth taking a last bite of something hot and living. The Deacon stood in silent shadows watching their progress, occasionally glancing up into the pale, inadequate light of the waning moon.”

When a man known only as The Deacon set up camp outside Rookwood, a murder of crows took to unnatural, moonlit flight. The crows came to Rookwood; trouble soon to follow. Things were already strange in that God-forsaken town, but no one could have predicted the forces and fates about to meet in a dust-bowl clearing in the desert. A Preacher. A Demon. An Angel. A Gunslinger.

A bargain with the darkness was signed in blood, and broken, and as such deals usually do, it went south. Now the fate of lost lovers, faith healers, ancient Gods and the Devil himself collide in a circle of wagons tended by the damaged and deformed, the saved and the shorn. There’s a power come to Rookwood, and this one-horse town is about to be transformed. Such deals are only made and broken…on Hallowed Ground.

From Steven Savile, International bestselling author of Silver, The Last Angel, and The Sufferer’s Song, and David Niall Wilson, Bram Stoker Award-winner David Niall Wilson, author of Deep Blue, This is My Blood, & Heart of a Dragon, comes a tale of the old west, magic, enlightenment and damnation readers have said is like Stephen King’s The Gunslinger meets Daniel Knauf’s Carnivale

Author’s Introduction to the 2014 Edition

This is not a typical western. If you are looking for a lot of gunfights, tobacco spitting, and cattle rustling, this is the wrong book. What we set out to do in Hallowed Ground is to create a layered, complex fantasy set against a backdrop of the old west. You have your snake-oil salesman, your gunslinger, young lovers, wandering characters you’ll no doubt recognize from mythology, or legend, integrated into a single novel.

No one in Hallowed Ground is exactly who, or what, they seem. You have to keep up with the varied storylines – they all meet in the end, and they are all important. You’ll meet Lilith, and the fates, angels and devils, and though each will have an air of familiarity, they aren’t exactly as you’ll find them anywhere else.

We are hoping to carry this on into a series – we have tentatively outlined a book based on Sam Hill – as in the saying, “What in the Sam Hill?” – explaining some of the legend and fact behind the phrase, and drawing our characters into yet another strange, surreal adventure.