This is My Blood 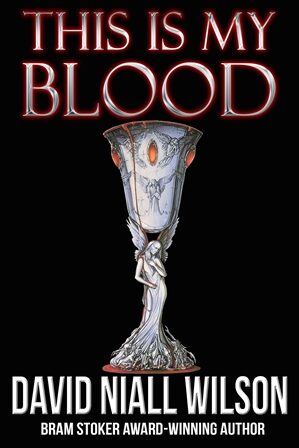 Religious ecstasy and vampiric bloodlust blend to potent effect in this horror-oriented alternate history of early Christianity. Debut novelist Wilson casts Mary Magdelene as a spirit created by the Devil to tempt Christ. When Mary refuses the mission, Satan rebukes Jesus and curses her to become a vampire: “She will hunger for that which You fight to preserve. She will thirst for the blood of manAthe lives, the very souls You seek to save will be her bread.” Mary follows Christ, hoping for a miracle that will allow her to gain eternal salvation even as her vampiric nature forces her to kill to survive. Through her inhuman eyes, and through the writings of Judas’s own gospel, The Book of Judas, Wilson shows Christ and his disciples at work, lending a decidedly different perspective to miracles such as feeding the multitudes with a few loaves and fishes or raising Lazarus from the dead. Here, Judas is steady and loyal, while Peter, possessed by the Devil, betrays Christ to the soldiers at Gethsemane, forcing both Judas and Mary to sacrifice what they love most in order to ensure Christ’s resurrection and the Church’s future. Wilson’s prose is smooth and powerful, carrying its allegorical weight with grace. His first novel is one of the most unique vampire stories to appear in recent years, balancing themes of damnation and prophesy against those of faith and redemption.

AUTHOR’S NOTE: This novel started it’s life as a novelette titled “The Fifth Gospel”. The title was changed on the novelette to “A Candle Lit in Sunlight,” when it was simultaneously accepted at Iniquities, a pro-level horror magazine, and Starshore, a pro-level speculative fiction magazine. It went to Starshore and was then reprinted in Karl Edward Wagner’s Year’s Best Horror, volume XIX in 1991. When I sold a copy of the magazine to a vampire fiction expert and collector at World Horror Convention, he came back later and said, “This must be a novel.” I sat on that for over a year, then, working on it late nights on board the USS Guadalcanal, I wrote this book in 21 days. I revised it in 7 and sold it within two weeks… to that same vampire expert – Robert Eighteen Bisang. He never published it, but eventually I sold it again to Terminal Frights Press for a limited edition of 1000 copies with the same cover art you see here by Lisanne Lake. It has been in print, off and on, once as The Temptation of Blood, and once translated into Italian. It is mentioned in The Complete Idiot’s Guide to Mary Magdalene, and it is one of my favorites of my books.

This is My Blood is the first novel I sold, though it did not come out first. It is a retelling of the gospel from a very different perspective. When Jesus goes into the desert and is tempted by the devil, there is one temptation added. One of the fallen is raised as a woman to tempt him with the flesh. Instead, the woman, named Mary of Magdalene, falls in love with Jesus and his promise of returning her to Heaven.

Cursed to follow him and drink the blood of his followers, Mary walks a fine line between her desire to love and support the Christ, and her burning need to return to Heaven. This novel takes the world of faith, which was the world of men, and of the apostles, and shows it through the eyes of a fallen angel – one who has, in her own words, walked the roads of both Heaven, and Hell. She doesn’t believe there is a God…she knows.

Faithful to the storyline of the original gospels, only weaving in new things when there are gaps in the old, this is a novel of faith, redemption, and ultimate sacrifice.

Another Author’s Note: I don’t believe in any sort of Great Space Fairies. I wrote this shortly after leaving all notions of organized religion behind. Not believing it, though, does not mean I don’t understand it…