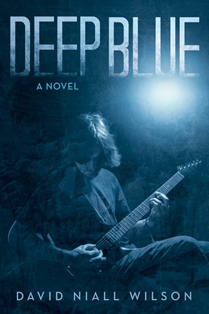 Available in eBook and Trade Paperback at Amazon.com

In this engrossing, poetic novel of spiritual evil and the possibility of salvation from Wilson (This Is My Blood), a burned-out musician, Brandt, is playing in an obscure band when he hears a homeless black man, Wally, play the purest blues on the harmonica he has ever heard, music that encapsulates all the pain of the world. Brandt begs Wally to teach him how to play the same way. He disregards Wally’s warning that he would have to take the pain into himself, and then play to purge it lest it consume him. Brandt’s performance that evening changes the lives of his fellow band members. Together they discover that they can play not to wake the dead but to settle restlessly roaming spirits. Opposing them is a sinister figure masquerading as a man of God, who wishes the pain to go on and on. As Brandt and the other band members slowly and convincingly come to realize that a larger world surrounds them, Wilson demonstrates that a horror novel doesn’t need gallons of blood to succeed, that spiritual terror can be even more effective. FYI: Wilson is a past president of the Horror Writers Association and an ordained minister.

The novel Deep Blue originated from the novelette by the same name published in an anthology titled Strange Attraction.  In Strange Attraction, all the stories were inspired by the “Kinetic” Art of Lisa Snelling, each author choosing one of the characters on an intricately detailed Ferris wheel sculpture.  I chose a harlequin, hanging by a noose from the bottom of one of the Ferris wheels seats.  I took the image, made it the wallpaper on my computer, printed it out and carried it around with me, and let it sink in.  I could have written any number of stories that would have sufficed, but somehow I knew there would be more to this work, and so I waited.

The publishers of the anthology, Vince and Leslie Harper, invited me to have dinner with them one night when my job took me to Washington DC.  We met for Mexican food and went together to see the movie Pi which, at the time, was newly released.  On the way to meet the Harpers, I walked down into a shadowed subway, and I was assaulted by some of the most haunting saxophone music I’ve ever heard.  It bordered the blues, walked down old jazz roads, and I never saw the musician.  That set the mood for what was to come.

I reached the restaurant without further incident, and we spent a pleasant hour scalding mouths and stomachs with jalapeños and washing them down with beer.  Then came the movie.  I won’t go into detail about Pi, but I’ll say it’s a black and white film, very surreal, filled with symbolism, and it left me visually and emotionally stunned.  I parted company with Vince and his wife, found my way back to the subway and my hotel, and called it a night.

The next day, a friend of mine and I set out to visit the Holocaust Museum.  I have always wanted to see it, but I was not prepared for the intensity of the images, the displays, and the words I would find in that short hour visit.  I purchased a book of poetry written by the victims, and left with so much bottled up inside from those two days that I thought it would be the end of my sanity.

Everyone comes to their crossroads eventually – the defining moment of life.  As Old Wally, one of the novel’s main characters tells us – “Crossroads, or the crosshairs.”  Forward or back, but you can’t stay stagnant – that way lies madness.  I give you . . . Deep Blue.