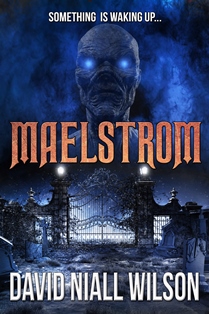 Available in eBook and trade paperback at Amazon & Barnes & Noble

The quote below says it all. Everything you would have expected from a horror “boom” novel is packed into this one, including bits and pieces from my own childhood. The tropes are piled on, but I think that’s okay this time out… and (I keep repeating myself) I wrote this a long time ago…

It is hard to get warm, fuzzy feelings about a horror story, but this one does the job. It has all the clichés: the kid with the rotten home life, the hard-boiled cop with the heart of gold, the charismatic evangelist that has brain-washed an unsuspecting small church, the tough (but sexy) reporter, and the sweetly innocent girlfriend. The story comes complete with sidekicks, clues, and an amazing garage band made good. There are so many tropes laid on, it shouldn’t work. But it does. More than that, the reader gets to know almost all of the characters, including a couple that you might wish you hadn’t. The terror and horror develop an almost comic element in places. Wilson understands the value of adding a good laugh when the tension becomes too much. Not to spoil the ending, but let’s just say that it all works out. Then, just when you think the fun is over, Wilson serves up a bonus short story set in the same little town. The reader gets to meet the kid and his sidekicks again, and you even get to re-visit the scene or the original misdeeds!

Includes the novelette: The Haunting of Victor Drahos at the end of the novel!

Something in Lavender, California is waking up. Rituals not properly completed for centuries are coming together. Nothing is what it seems.

When Nick Leatherman, his girlfriend Ruthie, and their buddies Flash and Weasel invade Shady Grove Cemetery for a “ghost hunt” on their way home from a concert, they are drawn into a web of darkness and intrigue that threatens to consume them. Nick and Ruthie witness a gruesome murder, and Nick’s pocketknife shows up at the crime scene the next morning. Nick has had problems in the past, and Inspector Kendall Straker remembers. He remembers Ned Leatherman, Nick’s alcoholic step-father as well, and he doesn’t believe the boy is a killer. The problem is that the knife – emblazoned with the name of the band Maelstrom – is the only clue he has.

Horace Goldbough is the local pastor. He’s built a huge following and a beautiful church, but there are things about the good reverend that the town doesn’t know. In particular there is his relationship with a dark woman named Beauchane, and a certain book he keeps hidden from the world.

With local reporters, and a television talk-show host hounding his every step, Straker attempts to unravel the series of grisly killings terrorizing Lavender, while simultaneously protecting Nick. Nick, in the meantime, has begun his own investigation, feeling trapped and needing to clear his name.

Ritual words are being spoken, and a power that has been denied access to the Earth for centuries is poised to strike. The clock is ticking. Can Straker, Nick, and Maelstrom find the answer to the killings and put an end to them before the final ritual takes place, or will a horror be unleashed on the unsuspecting town of Lavender beyond their comprehension?