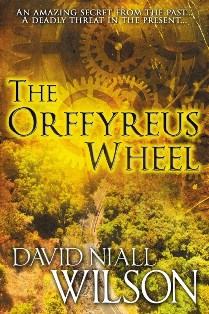 Available for Kindle and in Trade paperback at Amazon

AUTHOR’S NOTE: I love this book. It’s one of a small pile I plotted, outlined and did three chapters of for an agent who never liked anything. She wanted “Dan Brown” and got me. At least one reviewer at Amazon said, this, though…

If you like things like Angels and Demons, really, this is as good as any of them. Good story, written well.

Oh My GOD…. This is GREAT ! ! I so loved this book. Every thing about this book is so good it read’s like butter what a thrill. good price great read loved it.

In 1712, Johann Bessler unveiled an amazing invention. It was a Perpetuum Mobile – a Perpetual Motion Device – a wheel that spun after being set into motion until it was stopped with no mechanical input. It was capable of sustaining this motion and producing enough energy to complete “work” – meaning, literally, that there was something from nothing. Bessler never revealed his secret. He was hounded, mocked, and chased through a very rough and adventurous life. His secret died with him.

Except that it didn’t.

Elly Kassel is the granddaughter and heir of Evelyn Kassel, though the two were not close. Elly is called into the offices of eminent London Solicitors Ratliff & Brownridge, where she discovers that her grandmother was a rich woman. She also receives a trunk, and an envelope, which she is not to open until she reaches New York City. In New York, she is told, all her questions about her grandmother, and her inheritance will be answered.

What follows is a series of harrowing near-misses as Elly studies and learns the secrets of The Orffyreus Project, where free energy might be a very real possibility, and her grandmother’s dream of bringing the perpetual motion wheel into production and wide-spread use for the good of mankind seems very possible, and Maxwell Black does everything in his considerable power to stop her, to steal the technology, and to see that the interests of the Petroleum industry are protected from the imminent disaster of obsolescence. Meanwhile, the novel follows parallel paths, showing the odd life of Johann Bessler as he tries to sell his invention to the highest bidder in the distant past, and Elly Kassel as she tries to prevent her grandmother’s re-discovery of that invention doing exactly that. The two story lines bear down on one another, will history repeat itself and bury the wheel forever? The answer lies in the pages of “The Orffyreus Wheel.”