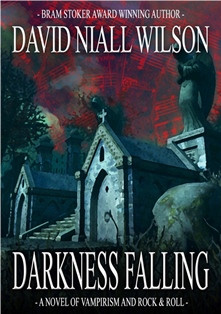 Available for Kindle and in Trade Paperback from Amazon

AUTHOR’S NOTE: This is one of my oldest novels. Originally, it was titled simply KLAUS and was written in first person. Along the way, several readers suggested it go to third person. The title shifted to The Path of the Meteor, and then it disappeared again. I edited it further to clean up the POV shift years back and it became Darkness Falling. Characters and settings from this book play a part in the most recent Donovan DeChance adventure, A Midnight Dreary. This is for all the more traditional vampire fans.

AUTHOR’S OTHER NOTE: I am thrilled beyond measure that Joshua Saxon is narrating this book. There was an earlier audio edition, but it was not good. This one will be epic.

When Klaus Von Kroft brings his band to the mountain village of Rathburg to perform a concert, a generations old tapestry of blood and darkness draws about him like a shroud. Delving into the disappearance of his parents, Klaus finds himself entranced by Rosa, a sunset-haired woman of mystery and darkness, her companions, and the eerily perfect music they play. But Rosa is far more than mysterious. She has stolen the blood and souls of men on the mountain above Rathburg for centuries. As Klaus is drawn into her web of vengeance and blood, his friends are dragged along behind. Can he unravel the mystery of the mountain and overcome the call of blood…or will they all fall to Rosa’s game of hunger and revenge?

The answer lies on the mountain, but there is little time…with Darkness Falling…