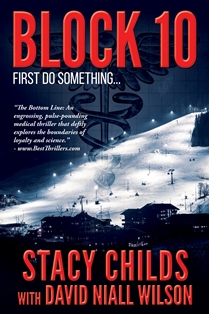 Available at for Kindle, in trade paperback and trade hardcover at Amazon

Available in eBook and hardcover at Barnes & Noble

Available in eBook formats at Smashwords

“Block 10 is an engrossing, intelligent medical thriller on par with the best of Robin Cook. I was hooked from the opening chapter and stayed up late turning the pages. Stacy Childs weaves weighty medical issues with heart pounding tension. I loved it!” -Robert Dugoni – Author of “The Jury Master”

“Block 10 is sensational! Page turning intrigue kept me guessing what was next. Being an Olympic skier myself, I loved the spice and thrill of the ski racing mixed throughout the suspense.” -Caroline Lalive Carmichael – Olympic Athlete Former member of United States Ski Team.

Luke Cooper dreamed of flying. He was an Olympic caliber skier with a bright future, when a freak accident ruined his knee, and sent him into suicidal depression. A stranger, Dr. Henri de Salvo, gave him a reason to live, and a new set of “wings,” thanks to an experimental medical treatment. With new focus, Luke turned to a career in medicine, a career that led him to accept an invitation to a secluded clinic in France where de Salvo continued his cutting edge – if morally questionable work.

Lured by the chance to help other athletes recover their lives, intoxicated by smooth cognac, beautiful women and dark intrigue, Luke finds himself drawn into another world. De Salvo has a shadowed past, and powerful enemies, and the French city of Toulon has its dark side. Through amazing medical breakthroughs, run-ins with the Corsican mob, and clubs where men fight for big money – and women, he searches for his own path. The question is, will he survive the journey, and can he live up to the age old medical adage, “First, do no harm,” while following the message of his own heart – “First, do something…”