Sins of the Flash 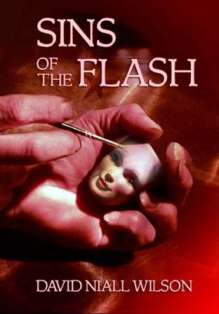 Available in eBook and Trade paperback at Amazon

AUTHOR’S NOTE: This is not a book for the squeamish. I wrote it a very long time ago, and I still get either “oh my god that is too sick,” or “wow… that was… wow” reactions. It is what it is 😉

Sins of the Flash is yet another gripping story set in the turbulent San Valencez, the author’s Californian imaginary playground, where a diverse array of characters; seedy, downtrodden, obsessive, manic and more play out their crazy existences against a richly described urban heartbeat. A crime drama that mixes drugs, alcohol, death and Art – the book rattles along as you get inside the mind of an artist with a passion for perfection that drives him to unspeakable deeds.

Psychological thrillers are unnerving by their very nature. When that genre is told from the POV of the psychopath, the ick factor just ratchets up a notch. This listen was icky on so many levels. That’s not to say this book was not awesome because it was. It was just a little too well-written.

Christian Greve was a man on a collision course with destiny. He spent his days taking graduation pictures, glamour shots, and baby pictures, and dreaming of the day when the world would praise him for his talent. Christian was an artist, but there was one problem.

All of the models he’s ever photographed have worked against him. They changed his careful poses. They tilted their head to ruin the source of lighting, or twisted their features slightly. He knew it was their fault, because the visions in his head – the images he intended – were pristine and perfect, down to the tiniest detail. He’d learned makeup the hard way from an abusive, chemically addicted mother who turned tricks and made him part of the show.

Now he’s found another way to perfect his art – and a new partner in agent, entrepreneur Hiram Gates.

When a string of dead models, their makeup eerie and beautiful, start turning up, Tommy Doyle and his partner, Big “Mac” Markum are called in. Doyle has spent most of his life chasing down psychos. He has a reputation for hating the press, and an innate ability to enter the darker side of the city, and bring the crazies to justice. Can he stop this new, apparently motive-less string of killings before the body count rises too high for his own sanity?

This is a San Valencez Mystery, set in David Niall Wilson’s fictional city of San Valencez, California – a place just left of reality, where nothing is ever quite as it seems. Look for other novels set in San Valencez, including the successful dark fantasy series The DeChance Chronicles, and the supernatural thrillers Deep Blue, On The Third Day, and Ancient Eyes.

This is the first full length Tommy Doyle novel, following on the success of his debut in the novelette “Burning Bridges,” published in the anthology “All Hell Breaking Loose.”