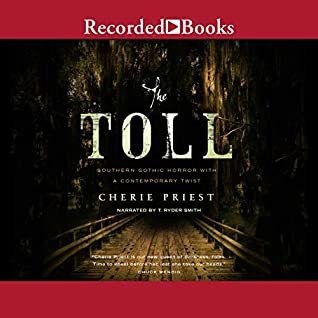 I had absolutely no idea what to expect from this book. I’ve read Cherie Priest’s books before, but never knew here as an author of horror, or folk horror, as this book was. I went in with no expectations and found myself enthralled.

This book has a Flannery O’Connor feel to it, reminiscent of the narrative in Wise Blood and every bit as peculiar. There is very little outright horror involved. The setting is far from civilization in an almost forgotten town beside the Okefinokee Swamp. The characters are quirky, some trapped there all their lives, some who left and returned, others who simply found themselves there, like the bartender Dave.

Titus and Melanie Bell launch the story, driving on State Highway 117 headed into the swamp, where they will spend their honeymoon canoeing. This is a thing that Titus says was his wife’s idea, but was clearly not. They bicker, argue, and find themselves on a bridge that should not exist.

This bridge and its history are woven into the pages of the story. Two old ladies who have taken in an orphan named Cameron. Raised by spinsters in the secluded town he’s a teen who speaks like an old man. There is a dog that likes to climb a tree, and a forgotten building full of dolls. There are locals who are absolutely not what they seem, but taken in stride.

And there is something in the swamp. Something that waits, and preys, that has come before this. While they search for his wife, Titus becomes enmeshed in the drama and folklore of the place, becoming more and more certain he’ll never see his wife again.

I listened to the unabridged audio of this, and the narrator, T. Ryder Smith, does an adirable job of getting all the characters just right. This book won’t scare you outright, but if you read carefully and think about all that is going on, you’ll start to experience the true creepiness of the words, and the setting. If you are on State Highway 117, and you see a seventh bridge, best to U-turn and take your chances back in Florida. Very well done and a pleasure to read. And I can’t help thinking there are more stories that could come from Staywater. I want more of the dog, and the dolls, but that is something for the author to decide.

Stories of the Eye – Book Review