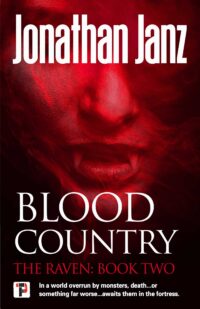 I came into Blood Country without having read the first book in the series, but it took right off, and I was able to meet and understand the characters as I went. This is an action-packed book that covers a short period of time, but fleshes out a world, and a group of comrades, perfectly. Dez is searching for Susan, who he was unable to save, and who has been taken by vampires into “Blood Country,” where the vamps rule and hunt, led by a powerful (and very full of herself) queen.

That the world is populated by those who were once human, but who were exposed to a biological weapon that released oppressed genetic characteristics is the key. There are monsters, heroes, werewolves and vampires and trolls and gape-mouthed monster fish. For the most part, you get a flash of monster that fades slowly to show the struggling humanity beneath.

As relationships shift and evolve, and various groups vie for control, a rag-tag band of heroes launches an impossible rescue attempt against impossible odds… while maintaining a level of snarky banter that simply never falls flat.

Very well done and builds well into the next book in the series.

The Wingspan of Severed Hands – by Joanna Koch – reviewed.