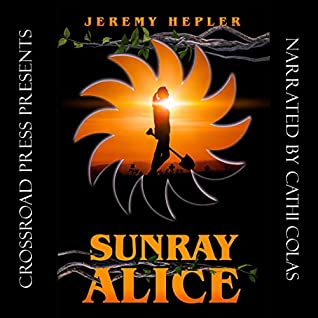 Full disclosure, I am the current publisher of this book. We acquired it when another publisher closed their doors suddenly, so this was my first chance to read / listen to the story. This is a great book. Jeremy Hepler, more known for darker works, has delivered a story with history, heart, and passion.

When four Nazi prisoners escape an internment camp near a small Texas town named Sunray, it sets a sequence of events in action with consequences to nearly every resident. Sunray is heavy on churches and saloons. Alice, whose father died in the war, finds herself pitted against an array of unexpected events, rival kids, her mother and her memories that would send most adults reeling.

The secret she uncovers, and fights for, is remarkable. The characters feel gritty, and real, and the relationships are clearly defined, steering the action. Told from the POV of Alice as an old woman, to a younger woman named Emily, this is a story you won’t soon forget.

And though it’s not always the case, this is a book where you don’t want to miss the author’s notes. How the story came to be, what it means to him, are all important.

The narrator, Cathi Colas, is the perfect voice, able to bring young and old Alice to live, as well as a fairly complex group of others seamlessly.

Things Have Gotten Worse Since We Last Spoke Review