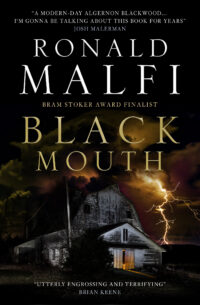 Jamie and Dennis Warren grew up in a home on the outskirts of the fields leading to the abandoned mine the locals call “Black Mouth,” where a tragedy far in the past has left a dark scar. Terrorized by a violent, drunken father, they found ways to cope. Many years have passed since Jamie moved away, but now he’s been called back. His mother is dead, and Dennis, who is not capable of caring for himself, has been left alone.  Except – Jamie doesn’t want to go back.

Fighting his own battle with alcohol, he is horrified by the thought of facing the home where so many horrible things happened to him as a child, and the guilt of leaving Dennis behind. He can’t leave Dennis there alone, so, in the words of Dennis himself, “Jamie Warren is home.” Not just Jamie, though. His childhood pals Clay and Mia turn up, and readers are led through the strange events that drove them all apart and away from Black Mouth, and the dark magician who haunts their memories.

Following trails through carnivals with purple hippos and broken dreams, and crossing paths with other’s the magician has left in his wake, the four childhood companions are forced to face their deepest darkness and hope not to be swallowed whole.