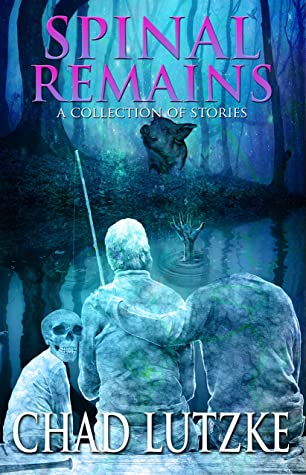 This collection is a not-so-friendly neighborhood of stories. Lutzke has crafted all the pieces in this collection around ordinary, everyday people, places, neighborhoods, relationships, and then taken them to strange, and at times very dark places. Often, it’s the matter-of-fact reactions, the unexpected ways the characters play off one another and interact, that are most disturbing.

As in all collections and anthologies, some of the stories made a deeper connection than others. The very first story, “Predisposition and a Box of Crayons,” caught me with the ending. It’s a serious drop into mental illness and parenthood that, if you have children, will leave a chill.

Another stand-out for me was “I Gave Them the Finger,” which introduces another theme that runs throughout the book – body parts. As mentioned above, it’s the very odd ways that those involved in the story react to the horrifying, absurd and chilling turns the stories take that is the key. These are not vivid, pencil in the eye horror stories. They are much more subtle and can catch you off guard. (There is at least one that goes extreme… just to see if you are paying attention).

My favorite story in the collection is “He Wears the Lake.” It’s strange, and more surreal than many of the others. It deals with aging, and dementia. It deals with “dealing” in ways that feel strange and at the same time very real.

“Better than October” is a reminder that teenage boys in coming-of-age stories very often do stupid things. They also, often, find themselves mixed up in ways that they did not expect, and can never escape.

“Baby Steps” is an almost humorous take on a modern day Renfield that is (at the same time) close to the bone for those suffering from addiction.

The final story, Vigil, was well-placed. An entire neighborhood, confronted with an unexpected horror, reacting one-one one, and as a group. Finding a way through something bad while, at the same time, continuing to be neighborly, to tell stories and share food. It felt at first as if all the neighborhoods of the book might be from one place, and that many of them were present for that vigil, even though it is not the case.

This is a very solid collection. Unlike most, it has themes that tie it together, and, with few exceptions, a style that does the same, giving it a solid form as a single book, rather than a patchwork. Highly recommended.